Digital transformation is also actively pursued in the sports industry. Arguably, the use of digital is no longer essential when it comes to running a club, such as the use of data to manage player conditions and the use of video analytics. In this article, we will present the initiatives and future visions of Yokohama FC and Macnica Sports DX.

Meeting of Yokohama FC and Macnica

The efforts of Yokohama FC and Macnica started only recently, but the connection between the two began with the meeting between Mr. Sato and Mr. Ageo, General Manager of Macnica, who were enthusiastic supporters of Yokohama FC.

“When I was promoted to J1, I heard from Mr. Ageo that I could not say hello in a timely manner due to contact error when VIPs came to the stadium.” It’s easy to do this by combining and notifying wirelessly. , I discussed DX with Mr. Ageo and the staff members” (Sato).

With the evolution of technology, DX is gaining momentum in the sports industry, including football, and strong growth is expected. Macnica is not just introducing technology to seek efficiency, but is working with Yokohama FC to make fans and supporters feel the change, with the goal of becoming the number one DX team in J1.

Vision and strategy of Yokohama FC

In 2018, when Ageo became president, Yokohama FC belonged to J2 and aimed for promotion to J1. Mr. Ageo initially spent a year developing the club’s vision. Over the years, we will eventually win the J1 title and aim to share the joy with the citizens of Yokohama and our hometown fans.

The vision is to win titles with excellent players and produce Japanese national team players. To this end, an environment to develop players and strengthen teams is extremely important, and coaches, instructors, scouts, medical staff, management systems, general facilities, grounds and clubs are also necessary.

Of course, in order to continue to be a community-loved team and player, to respond to fan services and media, and to actively participate in community activities, Yokohama FC has seven visions in 2019. We started to work there in the year. 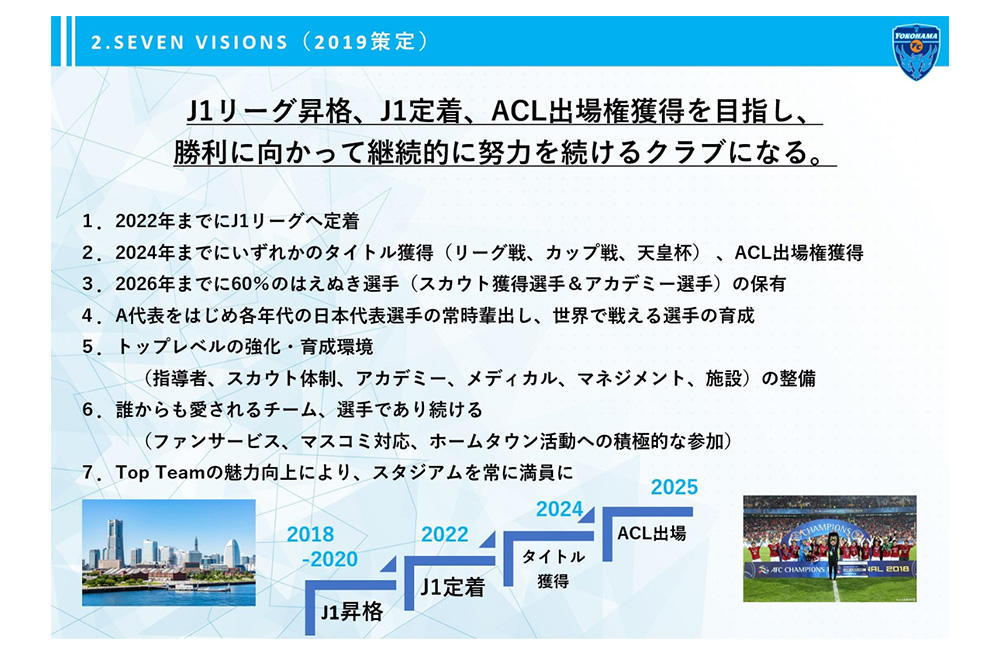 * The above materials are2019This session was formulated in the year2021year11This will be the content of the dialogue at the beginning of the month.

The team is getting stronger and will be promoted to J1 in 2019. “We are fighting against J1 in 2020 and 2021. I think we are progressing well according to the vision we have set ourselves so far” (M. Ageo).

Income is essential to achieving this vision. Yokohama FC formulated a sales plan in its medium-term management plan and set a target of 3 billion yen. In the 2020 season, when I was unsure if I could complete the league game due to the corona bruise, no spectators, mobilization restrictions, etc., I landed at 2 .1 billion yen. “3 billion yen is the 10th to 13th scale of J1. The upper team is the 5 billion yen scale, but in about 5 years, we want to increase the scale to 1.5 times the current scale so we can settle into J1 and aim for the title. I think” (Mr. Ageo).

The strategy to achieve the vision has three perspectives: commercial feasibility, competitiveness and sociality. Commercial feasibility is the marketing to expand fans and supporters, increase revenue by bringing them to the stadium and purchase goods, and use the funds to strengthen and develop players and teams. .. Competitiveness is the strengthening and training of players and teams to win the game. Sociality is also a hallmark of the J.League and attracts attention from the viewpoints of SDGs, ESG, SIB, etc., such as solving social problems faced by hometowns.

Mr Ageo says he likes “only what can be measured can be improved”. So said a leader invited from overseas as part of a project to make the J League “PROJECT DNA”, which the J League launched in 2019, the league where the most people grow in the world. We will quantify and improve. This is one of the things we want to put into practice at Yokohama FC” (Mr. Ueo).

Digital has made it possible to quantify many aspects of competition. In addition to individual player match performance, analytical techniques such as condition injury prevention, improving training efficiency, and capturing the opposing team’s situation from images are also progressing. “There are qualitative parts that cannot be measured in the eyes of the instructor, but I want to make the club stronger and expand the scale of the company by combining the quantitative and qualitative parts” (Mr. Ageo).

According to the survey, the market for “sports technology ✕” is expected to grow threefold by 2027, and in football, from the perspective of “fan supporters”, “smart stadiums” and “capacity building”. team”. technology and data analytics are expected to drive growth.

Macnica promotes various initiatives with Yokohama FC. The 2020 season, which was hit by the Corona disaster, was able to resume by limiting the number of mobilizations per match after a long period of suspension, but it was a rule to always measure the body temperature of visiting fans and supporters. At the start of the recovery, thousands of people had to be measured one by one with a measuring instrument, which was very time-consuming and burdensome on staff. It was also a problem to keep fans and supporters who want to enter the stadium early at the entrance for a long time.

Therefore, Macnica provided a body surface temperature detection solution as an infection control and DX solution. By automatically measuring the surface body temperature of the visiting customer and checking it by the staff, the customer will be able to enter without stress. “The admission time has been reduced by about a third compared to the past, and this is certainly a case where digital has improved the environment of the stadium” (M. Ageo).

“It’s better for the club to have 100% players in every game, but there is a risk of getting injured in a difficult game, or I would like to train and grow, but I’m always at risk of injury. I think that by using digital technology, players can train and face the game without injury, and by thoroughly analyzing their opponents, we can get closer to victory.” (M. Ueo) ).

Here, in an effort to prevent injury to athletes, we encourage the use of Strive Tech’s “Tech Shorts” with whom Macnica has a partnership. Technical shorts collect real-time condition data for the quadriceps, hamstrings and glutes of active athletes. Additionally, by combining and analyzing data such as the athlete’s stroke distance and acceleration acquired from GPS, etc. attached to the underwear worn under the uniform, it is possible to capture the amount of muscle activity and the degree of fatigue of the athlete. We support the planning and execution of appropriate training considering the risk of injury.

“With technical shorts, athletes can wear them in the same way as regular training clothes, and during training and games, they can see the situation such as muscle load in real time. In fact, they can also wash themselves, so only the athletes. It’s great to be able to develop a solution that helps not only the support members, including the manager, but also the support members,” (Mr. Ageo).

Yokohama FC has started efforts to train and strengthen athletes in collaboration with local universities and research institutes, and is expected to have the effect of enabling the children of the academy to become professional athletes through safe training at the ‘coming.

At Macnica, we are also working on using a wide variety of data acquired from sensors worn by athletes in combination with AI algorithms developed by Macnica’s AI research institute “AI Research & Innovation Hub” (commonly known as ARIH).

In particular, analysis using images such as player movement and the game’s opposing team must often be left to the viewer’s subjectivity, so labor can be saved by using an approach that uses AI algorithms. that analysts can concentrate on obtaining more sophisticated information.

In principle, match dates for J1 are Wednesday and Saturday, but even if the match does not take place, players and team staff must travel if the next place is an expedition destination, and during the season. It is very difficult to reflect the analysis of the data and insights from the analysis of individual player training, team tactics, etc., and have enough time to verify the effect . ..

“Yokohama FC has not yet made much effort in data analysis. Until now, the analysis team had quantitatively and qualitatively analyzed the data in a limited time until the next match, but it’s quantitative. There was a limit to analytics due to time constraints, namely that, for example, using AI, analytics staff can enter quantitative data without looking at the 90 minutes of the game video. , i think what i thought subjectively so far will actually be different because data. Using it by combining human eyes and AI, it will be more accurate. I expect that we can perform a high level of analysis.” (Mr. Ueo).

Of course, AI is by no means a “magic tool”. In order to realize AI that really contributes, Yokohama FC and Macnica will become one team, and while accompanying them, we will carefully listen to and understand the various problems faced by Yokohama FC, and try to solve them with AI. work together on an approach that can bring out.

“As you really solve each problem one by one, based on auditions like, ‘What do you spend your time doing? and “How can you spend your time on something different?” “”Let’s design this way and secure some time” “If you use AI a little more, this part will be clear” is a variety of efforts with Macnica to receive suggestions. Above all, this is one of the points for which we are very grateful.” (Mr. Ageo) .

Although their positions are different, ARIH members are becoming more and more fans of Yokohama FC through co-creation efforts with Yokohama FC. As the team’s supporter and ’12th player’, Macnica will be aiming for victory with Yokohama FC.