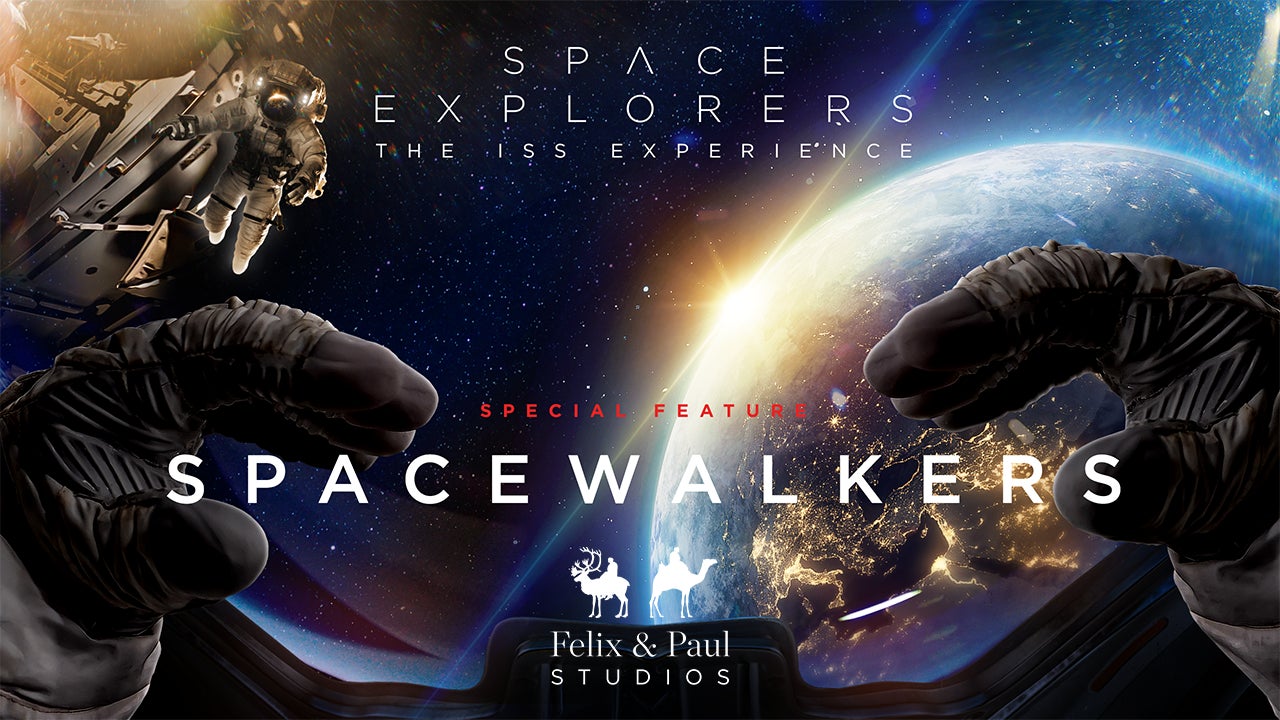 KDDI established an international XR content production alliance in the 5G era in September 2020 with telecom operators in South Korea, Canada, China and the United States to support the production of compelling original XR content and high quality. In this alliance, we collaborate with world-class content production companies Felix & Paul Studios, Atlas V and Trigger to collaboratively develop XR content and accumulate knowledge in the XR field. (*1) Initially, we jointly developed a VR work “Space Explorers: The ISS Experience” (4 episodes in total) that allows you to experience the International Space Station (ISS) with Felix & Paul Studios, and today we have 2 of “Special Feature” today. I will publish my work.

In “Space Explorers The ISS Experience –Special Feature Spacewalkers”, two astronauts jumping from the International Space Station (ISS) and performing extravehicular activities are photographed, and Japanese astronaut Akihiko Hoshide also appears in augmentation. Instead of being guided by the shot chosen by the director, the viewer can look in any direction they want, allowing them to experience a more immersive spacewalk as if they were actually there. Additionally, this content expresses the spacewalk in the world’s first live virtual reality. In “Space Explorers The ISS Experience –Special Feature Home Planet”, you can see the fantastic landscapes of the earth such as mountains and rugged rivers, spring clouds and great seas, and vast deserts of beautiful sunrise from sun to night book.
Both episodes are equipped with multiple 4K resolution sensors and use a state-of-the-art custom “space camera” exclusively for this work. The “space camera” is attached to the ISS robotic system “Canadarm2” and has an extreme temperature difference (from -155 ° C to + 121 °) that changes depending on the state of vacuum, ultraviolet rays, ionizing radiation , plasma and the amount of solar radiation. It has been modified to operate in the harsh space environment, such as (up to C).
Since its release, the VR video series “Space Explorers: The ISS Experience” has become popular content that has maintained the number one viewing ranking among VR content at Smart Pass Premium. Discover life in space and an unprecedented sense of reality with “au Smart Pass Premium”.
*1 Reference: September 1, 2020, KDDI CORPORATION press release https://news.kddi.com/kddi/corporate/newsrelease/2020/09/01/4647.html

【Space Explorers The ISS Experience – Home Planet Special Feature】
Thanks to the Cupola observation module of the International Space Station (ISS), you can see the Earth from space like an astronaut. From the beautiful sunrise to the night book fall, enjoy the earth’s fantastic landscapes such as rugged mountains and rivers, gushing clouds and the great sea, and the vast desert in about 8 minutes of video.

■ About “Space Explorers: The ISS Experience”
Space Explorers is an immersive entertainment series whose two works have already won Primetime Emmy Awards, recording the lives of astronauts as they adapt to life in space. The final season, titled The ISS Experience, is produced by Felix & Paul Studios and TIME Studios in conjunction with the US National Laboratory of ISS, NASA, Canadian Space Agency and other space agencies associated with the International Space Station. Felix & Paul Studios and TIME Studios will use a live 3D/360-degree VR camera on the International Space Station beginning in January 2019 to showcase recent arrivals of SpaceX Falcon 9 crew members on the commercial launch vehicle and off-air activities. aboard the ISS. filming. With the industry-leading shooting method, we achieved immersive images with full-scale precision without CG.
TIME Studios produces live VR content that replicates human vision to an industry-leading level. State-of-the-art image processing technology lets you bundle the same content for VR, AR, Mixed Reality, Mobile, and Desktop.

■ What is FELIX & PAUL STUDIOS?
Emmy® Award-winning Felix & Paul Studios creates a unique and engaging, immersive, presence-based entertainment experience for devices and places with next-generation technology. The 3D and 360-degree videos produced so far exceed 30 works, including the following works, and we pride ourselves on the industry’s highest technology in new media dealing with immersive videos.
-Original works: Space Explorers series, Traveling While Black, MIYUBI, Nomads series, Strangers with Patrick Watson
● Franchise works: Jurassic World, Cirque du Soleil, “1600 km to meet me” and “Isle of Dogs” by FOX Searchlight, The Confessionals series (Cast: Howie Mandel, Lilly Singh, Judd Apatow) Apatow, Trevor Noah)
● Collaboration with celebrities and artists: President Barack Obama and Mrs. Michelle Obama, Lebron James, President Bill Clinton, Eminem, Wes Anderson, Bree Larson, Jeff Goldblum, Bill Murray, etc. Numerous.
Content produced includes 360-degree videos that can be viewed on mobile devices such as smartphones, tablets and 5G-enabled headsets, 360-degree video projections on a dome and planetarium, high-end VR platforms such as Meta Quest, science centers, It supports various immersive formats such as a large screen projection in a space center and a cinema hall, and an immersive exhibition “THE INFINITY” on the scale of life carried out in partnership with PHI Studio.
Felix & Paul Studios is a leading space media company and the only media company recognized as an “Official Implementing Partner” by the ISS US National Laboratory.

■ What is “at the Smart Pass Premium”?
au Smart Pass Premium is a monthly service for all smartphones that offers “profitable” life, such as entertainment experiences and discounts on purchases. A monthly information fee of 548 yen / free for the first 30 days, available to all carriers, not just au, for entertainment digital content that enhances your smartphone life, handy apps, discount coupons and secure smartphone support. ..・Content that lets you enjoy major entertainment such as video (drama/animation/movie), music, books (magazine/manga), and live performance.
・ Perks that make sports, live music, and real life experiences fun
・ Discounts such as cinema viewing fees
・ Free coupons/discounts that can be used in cities such as convenience stores, fast food outlets and restaurants
・ Save money on “at PAY Market” (Loyalty Points / Free Shipping)
・ Unlimited use of web apps
・ Reliable support such as support for data recovery and data storage / Virus and unauthorized site blocking with OfficeScan
・ Digital content that gives you a sense of realism with 4K, 360 degree and multi-angle images
Please check here https://prcp.pass.auone.jp/main/ for details such as the latest benefits.

* All prices shown include taxes unless otherwise stated.