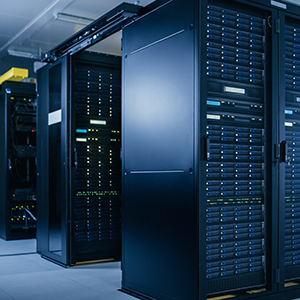 As DX accelerates, the power consumption of the data centers that process the data steadily increases. As decarbonization is required around the world, we also pay attention to brands that contribute to saving energy in data centers.

-Data center power consumption will increase due to increased data traffic, and energy saving will become an urgent issue-

The same is true for the IT industry, and in particular, energy savings are needed for data centers that are getting bigger and bigger due to the advancements in digital transformation (DX) in recent years. These facilities are called “green data centers” and are expected to expand in the future.

A green data center is a data center that achieves optimal energy efficiency while minimizing its impact on the environment. With the progress of DX in recent years, global data traffic is said to grow at an astonishing rate of an average annual increase of 30% by 2030, and alongside this the movement of data centers to become more large is remarkable. The electricity consumption of data centers is constantly increasing, and this is one of the challenges of a low-carbon society, it is therefore necessary to make it a green data center.

The Ministry of Economy, Trade and Industry announced in June 2009, “Green Growth Strategy for 2050 Carbon Neutral”, which lists 14 industries that are expected to grow, and each of them is high to achieve carbon neutrality. the target has been set, but “semiconductor/information and communication industry” is also included. Especially for data centers, the promotion of the domestic location of green data centers is included, and within 30 years, the energy savings of 30% or more of all new data centers and part of the energy consumption of domestic data centers will be eliminated. aim for carbonization.

● Accelerate energy savings by adding to the baseline system target

In response to this, the Ministry of Economy, Trade and Industry has set an energy saving target for data centers from April this year. For a specific industry/area, the data center has been added as a target industry to the “benchmark system” which defines an index (benchmark) to compare the energy saving status of enterprises to the within the industry. The referral system is an obligation for large enterprises to receive subsidies to support the introduction of energy-saving equipment, and is one of the indicators for related enterprises.

In the green growth strategy mentioned above, “Towards Energy Savings in Data Centers, we have integrated optical electronics technology such as optical cabling technology with high-performance and energy-saving technology. for the elementary devices (CPU, accelerator, memory, etc.) that make up the server. We will develop and demonstrate (photoelectric fusion) systems, develop technologies for optimizing performance and power consumption using software that controls data centers, and will support capital investment to expand production of energy-saving semiconductors.” It is likely that green data center movements will become more active in the future, including these technological developments.

● Brands strive to save energy in data centers

Associated brands are companies that strive to save energy in data centers.

ＮＥＣ <6701> [東証Ｐ]By using a “Phase Change Cooling Unit” rack cooling unit that reduces heat consumption by mounting it in the back of a server rack, we have achieved energy savings in the data center. In August 2008, in collaboration with NTT Communications (Chiyoda-ku, Tokyo), we developed a cooling system using a new non-fluorocarbon refrigerant for air conditioning of communication machinery equipment in data centers to reduce power consumption. air conditioning energy.

Fujitsu <6702> [東証Ｐ]Works to improve cooling energy efficiency by controlling air conditioning by artificial intelligence (AI). We have also developed an “Immersion Cooling System” which cools the entire server by immersing it in liquid. Since the cooling fan and air conditioner required for air cooling equipment are no longer needed, it attracts attention because it can reduce the power consumption of the whole server system, including the cooling equipment, by about 40% compared to the air cooling system.

Some data centers take in outdoor air to reduce power consumption, but Sakura Internet <3778> [東証Ｐ]Set up a data center in Ishikari city, Hokkaido which is a cold region. By taking in cold outside air, energy consumption is reduced by approximately 40% compared to urban data centers. In August 2015, a solar power plant was built in the neighborhood and efforts are being made to use renewable energy.

We also want to pay attention to the development of energy-efficient technologies that fit into our green growth strategy. Japanese telegraph and telephone <9432> [東証Ｐ]Aims to commercialize “photoelectric fusion technology” within 30 years. In April last year, it announced that it would form a business alliance with Fujitsu to promote joint research and development towards achieving low power consumption and high performance computing.