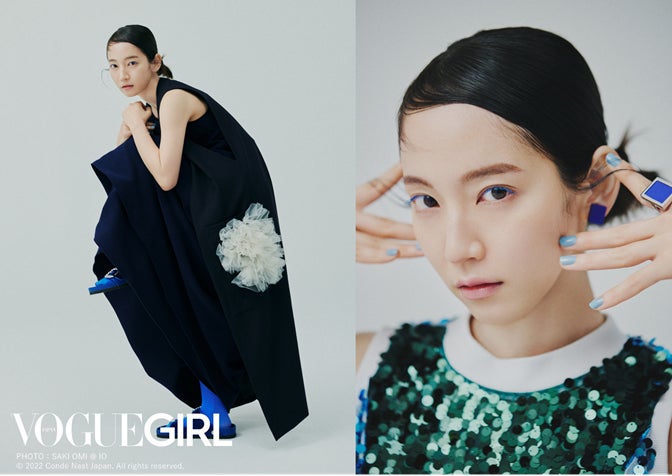 The March 2022 cover was actor Yoshioka Riho who appeared in the popular work “Holic xxxHOLiC” released on April 29. He gained attention with the NHK TV novel “Asa ga Kita” and has been involved in many topical works since then. Received the 43rd Japan Academy Award for Newcomer Actor for the film “Parallel World Love Story” released in 2019 and the landmark film “The Witness”. Currently, the hit drama “Shizuka-chan and Daddy” (NHK BS) is airing. Now, “Holic xxxHOLiC” (released on April 29, 2022), “Haken Anime! from WOWOW “Flesh”, she has an overwhelming presence. you can dress freely in different styles of blue dresses. A soft blue mesh dress, a deep navy blue volume dress like before dawn, a light baby blue tulle dress , a sequined dress that shines like a jewel, etc. Enjoy it.

The editor of “VOGUE GIRL” immediately associated the color of blue with Mr. Yoshioka’s transparent skin and a clear presence that seems to stand out. An innocent smile that shows when the camera is not rolling. He mesmerized the staff with his acrobatic poses, gorgeous eyes and friendly smiles.” And Riho Yoshioka himself said, “Blue is a color that I personally like, and it’s also related to the color of my heart. It’s a free and calm image. At the same time, I was taking pictures thinking about the colors when the view in front of me was clearly unobstructed.”

Also, in the film “90 Seconds Challenge”, which is the annual film of “VOGUE GIRL”, “What if you wanted to express your personality in one word?”, “What is your favorite bento accompaniment?”, “What is your habit to correct?” We’ll answer any questions you might be interested in, such as recommended places in your hometown or Kyoto, as long as you can answer them in 90 seconds.

【VOGUE GIRL】
Published by Condé Nast Japan from March 2011 to March 2015 as a supplemental edition of “VOGUE JAPAN”. Full transition to digital starting fall 2015. Bridging digital media and advocating not only “cute” but also stylish lifestyles for millennial Vogue girls who encounter world-class fashions and trends, jumping across genres and borders.

[À propos de Condé Nast]
Condé Nast is a global media company with iconic brands including Vogue, The New Yorker, GQ, Glamour, AD, Vanity Fair and Wired. The company’s award-winning content reaches 72 million print platforms, 344 million digital platforms and 451 million social platforms, with over one billion video views each month. .. Headquartered in New York and London, the company has partnerships with local licensing partners around the world in China, France, Germany, India, Italy, Japan, Mexico, Latin America, in Russia, Spain, Taiwan, United Kingdom and United States. We operate in 32 markets around the world including. Founded in 2011, Condé Nast Entertainment (CNÉ) is an award-winning production and distribution studio that creates programming for film, television, social video, digital video and virtual reality. Since its establishment in 1997, Condé Nast Japan has been providing high quality and premium content for over 20 years. Starting with “VOGUE JAPAN”, which was first released in 1999, “GQ JAPAN”, “WIRED” Japanese version, “VOGUE Girl” and “VOGUE Wedding” are under development in Japan. In addition to delivering content in magazines, digital magazines and websites, “VOGUE FASHION’S NIGHT OUT (FNO)”, “VOGUE JAPAN Women of the Year” and “GQ Men of the Year” will provide audiences with a powerful experience . provide it to everyone. In addition, in order to meet the complex needs of the Japanese market and the ever-changing media environment, in 2014 we launched the white-label creative studio business “Condé Nast Creative Studio”, which will be fully serviced in January. 2020.・Rebranded as “CNX” creative agency. In 2016, we launched the “Condé Nast Video” business, which manages video content, and became one of the first to start business as a premium video player. Additionally, we launched a new “Rumor Me” project for Gen Z and social talent agency Condé Nast in 2019, kickstarting business with social media and next-gen creative influencers.