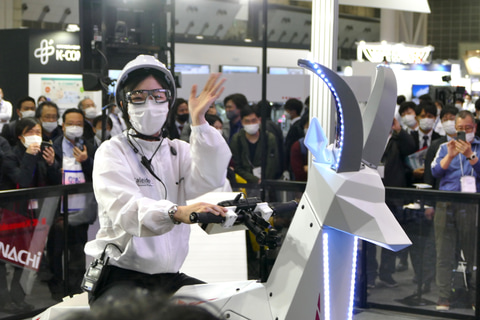 Kawasaki Heavy Industries, Ltd. will showcase a new model of the “RHP Kaleido” rugged humanoid robot series at the “2022 International Robot Expo” to be held at Tokyo Big Sight from March 9 to 11. , “RHP Friends”, which is smaller in size and has better affinity with people, and “RHP Bex”, a 4-legged robot with a maximum carrying capacity of 100 kg, were released.

The tough humanoid “RHP Kaleido” is an image of aerial work

The demonstration, which took place four times a day on the stage of the Kawasaki Heavy Industries International Robot Exhibition booth, was held in a format in which three types of robots appeared in order.

The first to appear is “RHP Kaleido”. Developed by Kawasaki Heavy Industries from 2015, it was announced at “2017 International Robot Exhibition” in 2017. RHP is short for “Robust Humanoid Platform”, and according to Mr. Masayuki Soube, who is in charge of development, the “RHP Kaleido” announced this time is the 7th generation.

This RHP Kaleido is 179 cm tall, weighs 83 kg and has 34 degrees of freedom. The characteristic is strength, the load weight is 60 kg with both arms, and it is said that it can be effectively lifted with a bench press. The walking speed is 5km/h.

Waist section at the back

Three-fingered hand. The grip strength is 40 kg. It is said that once you grab it, it will not come off even if you put all the weight on it.

The RHP Kaleido demonstration was conducted in a scenario that included high altitude maintenance work on tall structures such as dangerous towers and windmills. The RHP Kaleido that appeared walks slowly. He showed he had enough strength to support his weight doing push-ups and his ankle joint had a great range of motion.

After that, two human workers lifted it with a crane and went to a high place where the inspection site was. After grabbing the steel frame with his own arm and performing an action mimicking a hammer inspection, he slid off the steel frame and landed grabbing it with both arms.

Another type of RHP Kaleido demo involves crossing a single bridge and finally descending a step. The movement of the waist when walking on Ipponbashi is interesting.

If you look at the moment of the jump in slow motion, you can see that the position of the center of gravity has not increased so much, but the flight time is reasonable, the shaking after landing and the state of its vibration control .

“RHP Friends” appeals to people by pushing wheelchairs and dancing

“RHP Friends”. Has twin eyes with hands and a five-finger display

The second humanoid that came out in succession was “RHP Friends”. He is 168cm tall and weighs 54kg which is much lighter and smaller than RHP Kaleido.

The degree of freedom of the whole body is 40 including the 10 axes of the hand. It is said to be developed assuming detailed work in a narrower place. There is also an eye on the screen and communication with people is also more important.

In the demonstration, assuming the use in the field of long-term care, it was shown how to push the wheelchair that the elderly were supposed to drive while communicating with people, and how to dance to appeal to coordinated control of the whole body.

For dance, teaching by motion capture is used. Using the motion choreography function of “Choleonoid” integrated GUI software for robots, which was developed by the National Institute of Advanced Industrial Science and Technology and is currently marketed by Choreonoid Co., Ltd., by capturing the movements of people actually dancing with motion capture Converted for robots.

The development of the Kawasaki Heavy Industries humanoid is in collaboration with the University of Tokyo and the AIST-CNRS Robotics Collaborative Research Laboratory, an international collaborative research laboratory established by the National Institute of Advanced Industrial Science and Technology ( AIST) and the French National Center for Scientific Research. (CNRS) is in progress. “Mc_rtc” is used as part of the robot control software.

The latest to appear is the four-legged horse or goat-like robot “RHP Bex”. It is a multi-legged robot developed with the assumption that it will be put into practice faster than humanoids, and since it uses four legs of RHP Kaleido, which weighs around 80 kg, it can carry more 100kg.

The biggest feature is to use two modes, 4-leg walking mode and wheel movement mode. It has a passive wheel in the knee part of the leg and a driving wheel in the center of the torso, and when going from uneven rough terrain to flat terrain, it turns into wheel motion mode and moves .

During the demonstration, he helped harvest crops in a rough terrain field and showed how a person enters and controls a robot. In addition to agriculture, it should be used in operations such as carrying luggage on construction sites and inspections in factories.

The “V-Sido” robot control system from Asratec Co., Ltd. is used to generate the walking movement of the legs. V-Sido generates the walking motion of the robot in real time from human instructions (steering wheel manipulation by the passenger or remote control using a joystick, etc.) and information from sensors like the mounted gyroscope on the robot… In addition, the application of walking motion generation is said to also generate whole body motions such as bending and stretching.

By using “V-Sido”, people can ride and walk while running in real time.

Large-scale entry into the field of service robots

In addition, the company is also developing a two-armed self-propelled service robot called “Nyokkey”. Nyokkey, who has long arms and an extendable neck, weighs 75 kg and has 6 arms. The payload is 10 kg.

Development started around the spring of 2021, and the hardware was made around the summer, so it was developed at high speed. According to Mr. Hitoshi Kubo, who is in charge of development, since it is currently a prototype, we are not particularly concerned with making everything from scratch by ourselves, but prefer development first. of applications in the form.

You can open doors by pushing and pulling with your long arms.

We have already conducted demonstration experiments such as transporting drugs and samples to Fujita Medical University Hospital and checking patient status at night. This time we also demonstrated the image of transporting luggage from a warehouse in cooperation with an unmanned VTOL and a delivery robot also under development by Kawasaki Heavy Industries.

Additionally, it is said to be considering application to service and serving in restaurants, patrols in buildings, etc. Specifically, Nyokkey will demonstrate service and coffee service at “HANEDA Future Lab” which the company plans to open at Haneda Innovation City in April 2022.