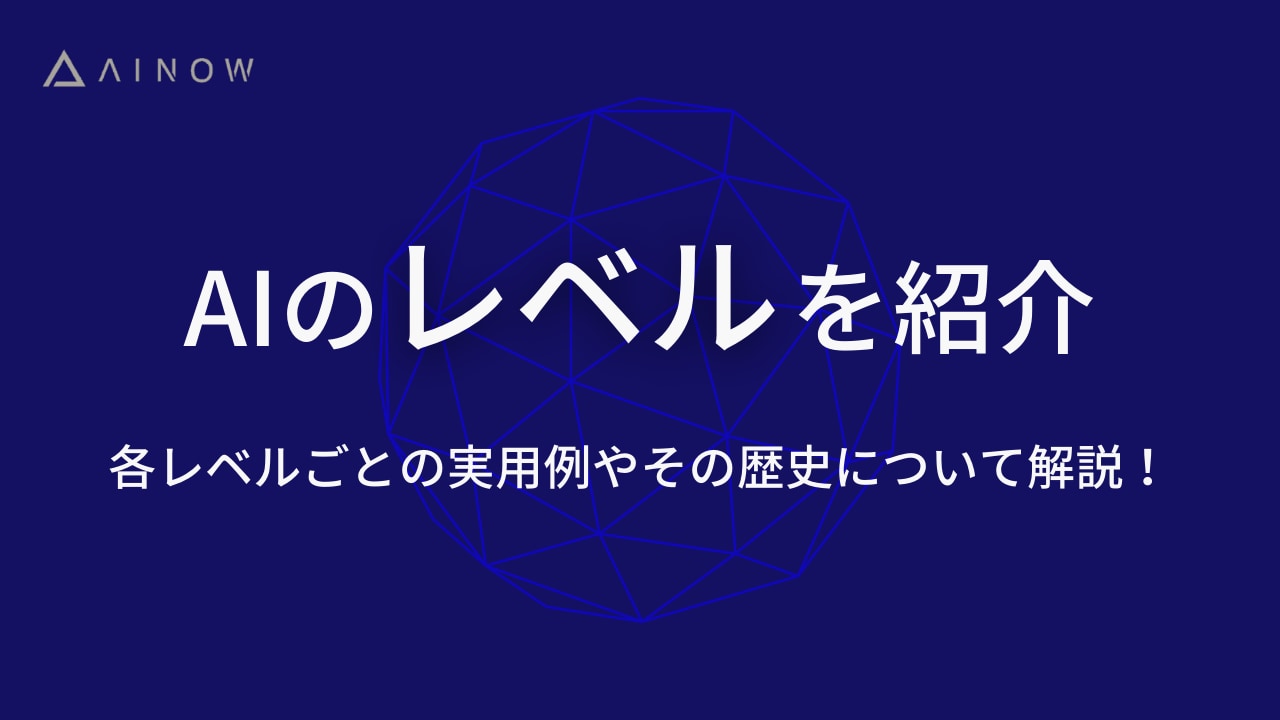 In this article, I will introduce you to the AI ​​level. There are different types of AI around us, from the simplest to the most complex, and they are classified into “levels”.

We will discuss interesting topics such as the level of AI to which the products around us belong or if it is possible that a higher level of AI will be born.

The word AI (artificial intelligence) has several meanings and definitions. To briefly explain AI, it is a technology that “achieves intelligence using a technique called computation”.

When describing AI, it is sometimes referred to as an “intelligent computer” more intuitively. The question in this article is to know what this “intelligence” is.

AI has a level

The AI ​​has levels depending on how smart the AI ​​is and what it can do. There are categories ranging from level 1 to level 4, and the higher the number, the more complicated the mechanism adopted.

In the next chapter, we’ll take a closer look at each level of AI.

Explanation of AI levels 1 to 4

AI can be divided into four levels depending on the processing mechanism and the algorithm used. The levels are as follows.

I will explain each of them to you.

First, I would like to introduce you to the simplest AI, “Level 1”. Level 1 AI is such a simple control program that it can no longer be called an AI from current AI technology.

The control program consists of conditional branches and generally produces a simple output in response to an input. From there, it can be said that AI research started from a field of control engineering research.

▶ What is an AI algorithm? ｜ Easy to understand explanation using numbers! >> >>

Level 1 AI is all around us. Have you ever heard of the term AI-powered home appliances? When we say “equipped with AI” in home appliances, we are usually referring to this level 1 AI.

For example, an AI-equipped refrigerator automatically controls cooling based on the type of food stored and the lifestyle of the user. In addition, the AI-equipped air conditioner controls the air volume and adjusts the temperature according to the user’s position and the outside weather conditions.

Level 2 AI is an AI that goes further than Level 1 AI and selects the next behavior from several behavior patterns based on the input.

AI that behaves like this is called rule-based AI. Pre-conceived patterns of behavior are accumulated as “knowledge”, and Level 2 AI makes inferences and searches based on the inputs.

In this sense, level 2 AI seems to think for itself, so it is close to the image of general AI (artificial intelligence).

A typical example of a level 2 AI is a question-and-answer system. The Q&A system is a system that allows you to exchange questions and answers in natural languages ​​such as Japanese and English.

▶ What is IBM Watson? ｜ Explain the differences with AI, what you can do and examples of how to use it! >> >>

Level 3 AI is AI that learns through a mechanism called machine learning.

Level 1 and Level 2 AI rules are set by humans to produce a fixed output based on the input, but Level 3 AI finds the data pattern on its own and adjusts the output depending on the entry. ..

Level 3 AI requires humans to define the characteristics of the data that the AI ​​refers to during training. Therefore, it does not perform completely autonomous learning, but it can produce much more variety than level 2 AI.

A typical example of a level 3 AI is a search engine. When we search by entering a keyword in the search window, the items in the search results are displayed together.

▶ What is big data? All explained, including definitions, examples and how to use >>

Level 4 AI is an AI that learns through a mechanism called deep learning. The big difference with Level 3 AI is that you can do the learning process yourself, including tuning the features.

Deep learning can process much more data than machine learning. As a result, many AI applications that were previously technically impossible have been successfully realized.

The AI ​​used in self-driving technology predicts the movement of cars and people in front of us, and continues driving while instantly determining the type of obstacle in front of us.

For this, a large amount of data must be computed in an instant, which has been difficult with conventional machine learning, but has been partially put into practice due to the development of deep learning technology.

▶ Related Articles ｜ What is Autonomous Driving? Presentation of the explanations of each level and 15 examples >>

▶ For more information on AI use cases, see this article >>

There are three AI booms that have happened so far.

In this chapter, we will explain the relationship between the above boom and AI level.

The simplest level 1 AI was designed in the early days of AI. It was in this early AI boom that the name AI was coined.

During the early AI boom of the 1950s and 1960s, much research was done on simple reasoning and exploration programs. However, it quickly reaches the limits of the technology.

It was difficult to apply AI, which can only solve the so-called “toy problem”, to society, and technology could not keep up with ideas, and the AI ​​boom gradually came to an end .

The second AI boom was caused by the idea of ​​Level 2 AI. In the 1980s, the so-called “expert system” AI was actively developed.

An expert system is a system that behaves like an expert by comprehensively grasping specialized knowledge such as medicine and law.

However, expert systems have the disadvantage of not being able to process unknown data. With level 2 AI, it is difficult to do anything other than the pre-educated response, and it is not possible to respond to human ambiguity.

It’s the end of the second AI boom. However, AI research has not stopped. The development of technologies that allow AI to learn autonomously and respond to unknown data, such as Level 3 AI, has made steady progress.

Then, the breakthrough of deep learning used for level 4 AI caused the third AI boom.

Typically, this breakthrough is said to have started when a research team using a deep learning model won the championship with overwhelming results at the 2012 World Image Recognition Congress.

The third AI boom has greatly expanded the range of technologies that use AI, such as image recognition, speech recognition, and natural language processing.

Additionally, shocking technologies such as shogi, go AI, and self-driving technology that exceed human capabilities have been developed.

▶Related Articles｜Is the AI ​​the most powerful in the world of board games? -How awesome is AlphaGo >>

In this article, I introduced the AI ​​level and its history. We can see that the AI ​​around us can range from very simple to complex, like deep learning.

Also, if you look at how level 1-4 AI is contributing to the AI ​​boom, you’ll find a lot of interesting things.

It will be interesting to predict what the future AI boom and Level 5 AI will look like.