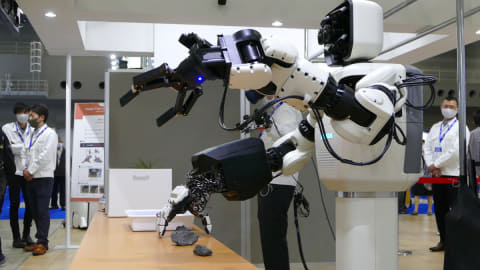 Honda will be able to remotely control the “2022 International Robot Exhibition” to be held at Tokyo Big Sight from March 9 (Wednesday) to March 12 (Saturday) with its own multi-fingered hand. We exhibited “Avatar Robot” (alternative robot) and “UNI-ONE”, hands-free personal mobility.

First, “UNI-ONE” personal mobility. In 2012, Honda announced a seated-type personal mobility device called “UNI-CUB” that allows free use of both hands, and conducts demonstration experiments at the National Museum of Emerging Science and Innovation and other places. It features original balance control technology born from Honda’s robotic research and the “Honda Omni Traction Drive System”, an omni-directional drive wheel mechanism that can move freely back and forth, left to right. straight and diagonal 360 degrees. “UNI-ONE” is one development. As with the “UNI-CUB”, you can operate it by tilting your body’s center of gravity a little.

In addition to work, it is used for entertainment and recreation. The special feature of “UNI-ONE” is that the seat surface rises and falls. This facilitated the transfer of users such as wheelchairs. By raising the seat, the line of sight became about 150cm, which made it easier to match the line of sight naturally with someone standing and walking sideways, or reaching for something on the shelf. In addition, when the seat surface is lowered, the casters on all sides touch the ground, which makes it more stable.

When you board, secure your legs and hips with the seat belts. I was worried when I saw it because I couldn’t go down when my legs were fixed, but when I went up it, I felt more stable and relieved when I went up. Also, as Honda says, the height of the line of sight with people walking by was natural. In the driving experience, I was able to experience reaching the shelves and even in the low position.

Ride with a belt on your stomach and legs

In addition, there is a small joystick on the right side of the main body, and it is also possible to operate the joystick when the seat surface is lowered. If you want to move a little, this interface is more convenient than weight transfer. It is said to be planning to launch a demonstration experiment using “UNI-ONE” in 2022.

Another exhibit is a remote-controlled (alternative) avatar robot. He is an upper-bodied humanoid with a “multi-fingered hand” who is dexterous and powerful. It is a robot that is an extension of technology born from humanoid research (humanoid robot) that Honda has been developing since 1986, and the bipedal humanoid “ASIMO” announced in 2000 and withdrawn at the end of March. ..

For remote control, the operator wears hand tracking goggles and gloves to operate the robot. The feature is that it not only tracks people’s movement, but also has a function called “AI support remote control”. The glasses detect where the operator is looking with the line of sight. The system estimates operator intent using not only eye movements, but also hand and finger movements.

By combining this information with shape information using the robot’s own sensor, the robot automatically adjusts balance such as hand position, fingertip contact position, and force to be applied to the fingertip. finger, and develop a plan of action. Execute while controlling. During the demonstration, he took a PET bottle and handed it to a person, or picked up and moved pebbles with complicated shapes. The goal is to increase the work the robot can do by flexibly coordinating maneuvers based on human situation judgment and AI support by autonomous functions.

It can be manipulated by automatically adjusting the force to be exerted and the contact position with the fingertips.

Honda has a concept of “cooperative intelligence” in which humans and intelligent systems interact with each other. In addition to the autonomy of mechanical systems, the concept is that humans and machines can cooperate to develop and improve each other’s abilities.

The robot’s body part that moves by remote control is the same as the humanoid “E2-DR (Experimental Legged Robot for Inspection and Disaster Response)” announced by Honda for disaster countermeasures at the international robot conference “IROS 2017”. ..

The side of the Honda Avatar.thin robot

The “multi-fingered hand” performed a series of demonstrations such as opening the tab of a juice can and observing the direction of force when holding the ball, even with the arm alone.

The “multi-finger hand” released this time has a fingertip power of 50N. The 224-channel pressure sensor can indicate the contact status, and the 6-axis force sensor can detect the fingertip contact force. By using the principle of moving pulleys, it is said that one obtains both resistance and miniaturization. The hand controls the balance of contact force based on form and balance. It is possible to take 13 kinds of hand shapes, which will cover 80% of the work used in human life.

Honda aims to use this hand for operations that cannot be grasped by simple grippers or suction, such as covering an object with the fingers and applying force firmly. It involves opening the lid of a PET bottle and pressing and turning a key. The last type of hand has been reduced to almost human size. The mechanism was also said to be set from the elbow first.

The latest model has been scaled down to human size

Deep reinforcement learning is used to falsify movements that are complicated to program, such as how to use force strength and sliding according to contact state, and switching to target posture. It is said that even if there are variations in the recognition results, the target is partially invisible, or there are uncertain parameters, it can be dealt with. This is a joint research with Associate Professor Takayuki Naga, Kyushu Institute of Technology.

Uses a low-latency, high-performance, fault-tolerant ring network. We are looking for a trial

Avatar bots use a “low-latency, high-efficiency, fault-tolerant ring network”. It is a single protocol that can be transmitted to any node on the network without data collision, and even if an error occurs, the location of the error can be identified and recovered. The maximum number of connections is 256 nodes, and the shape is ring type, star type, daisy chain connection. The communication speed is 1 Gbps, the latency (response time) is 62 microseconds with 16 nodes, and the efficiency is 99.2%. They say he’s looking for a trial.

Research on robots that inherits from “ASIMO”

Let me introduce Honda “ASIMO” to you again. “ASIMO” is a bipedal humanoid announced by Honda in 2000. The goal is to coexist with people in daily life, and the height is 130cm, which is the height of a human child. After that, new models were announced in 2005 and 2011.

Not only hardware but also software upgrades are repeated, not only walking on flat ground and stairs, but also running, walking on uneven ground, predicting the direction of movement of people in a space where several people are walking. functions such as walking while walking, listening to the voices of multiple people, and linking with the environment-side sensor system, but it is also a humanoid robot integrated at a high level. Details can still be found on Honda’s official website.

“ASIMO” has long been proud of its outstanding popularity due to its familiar design, movement and functions. However, it is said that development has now been halted. The public demonstration at the National Museum of Emerging Science and Innovation and the 1st floor of Honda Headquarters in Aoyama will end in March 2022.

Honda Avatar Robot is seeking a Technology Demonstration Partner with the aim of starting technology demonstration in 2023 for practical application in the 2030s. In addition to Technology Verification Partners, Mr. Masanobu Takeda, Chief Engineer, Frontier Robotics Area, Honda R&D, and Mr. Masaki Yoshihira, Deputy Chief Engineer, said, “If a useful and interesting partner appears, it could be done with other companies.”

“Until now we announced it as a single independent package like ASIMO, but from now on we will announce each technology and work with partners as needed.”