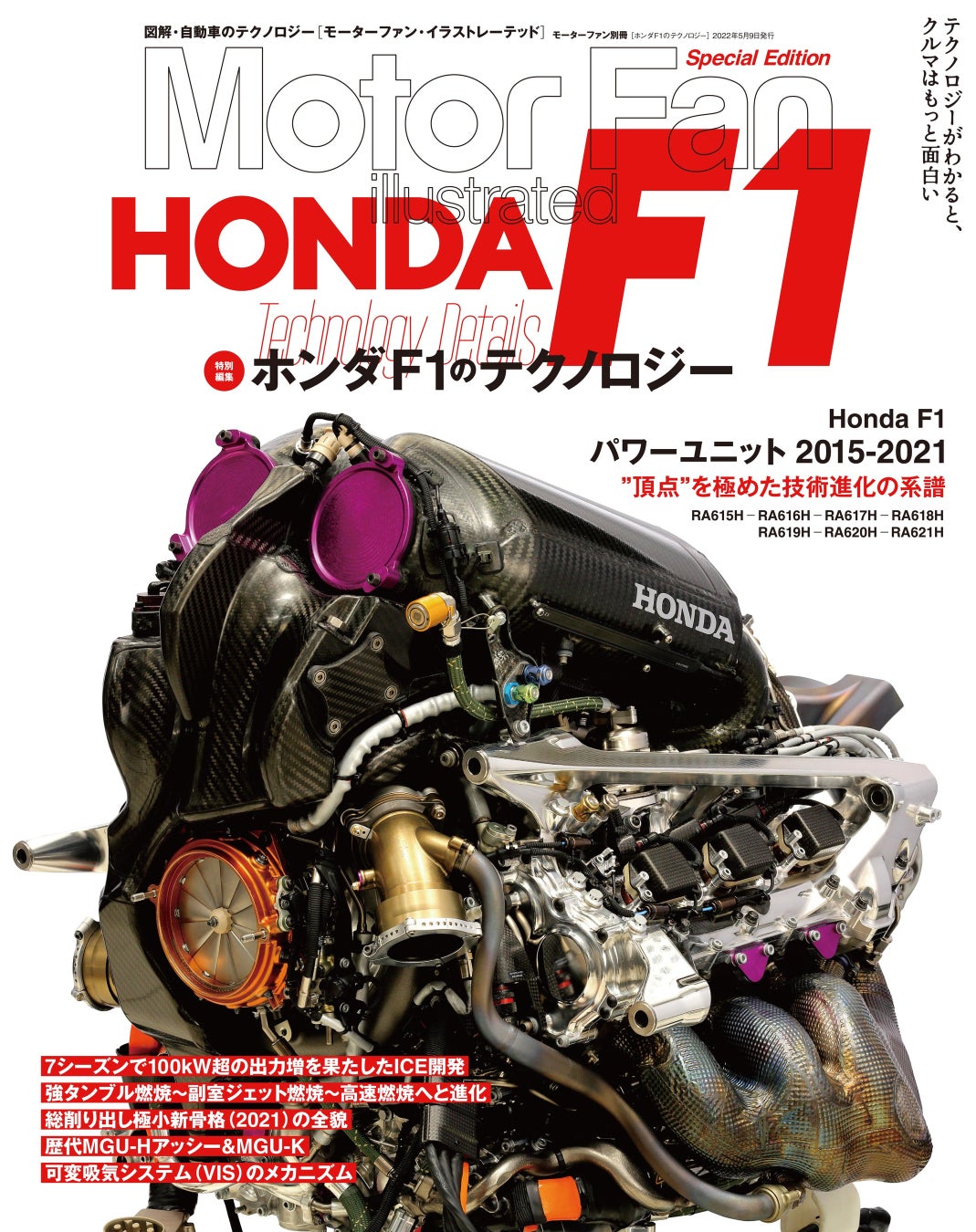 Honda supplied engines to McLaren, Toro Rosso/AlphaTauri and Red Bull from 2015 to 2021. Following the end of the 2021 season, the 2021 “RA621H” powertrain adopted a new skeleton ahead of schedule. This radical decision was successful and led to the acquisition of the title by Mr. Verstappen (Red Bull).

The illustrated Motor Fan special edition “Honda F1 Technology” summarizes the technological evolution of the powertrain during the seven seasons of Honda F1 (participation in the 4th season). With the full cooperation of HRD Sakura (at the time of the interview), where the Honda F1 development base is located, it is mainly composed of photographs taken for the first time in the world. Many technologies will be revealed for the first time in this magazine, and it is a coveted book not only for F1 fans but also for mecha enthusiasts. 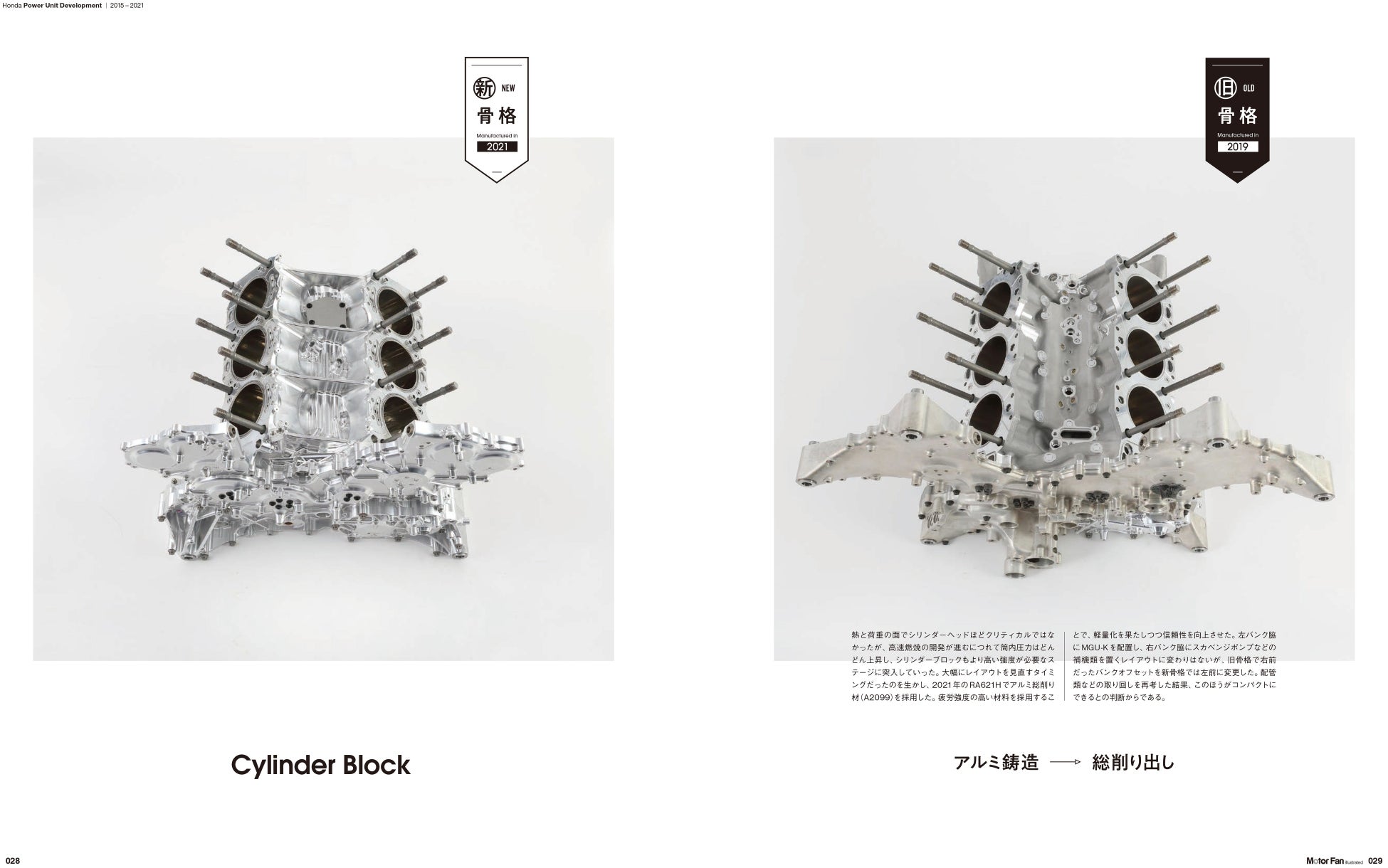 What is a “new skeleton”? It’s obvious when you open this magazine. After all, ancient skeletons are compared side by side. For example, a cylinder block. The old skeleton until 2020 is a general aluminum casting for a racing engine, but the new skeleton is a fully machined high strength aluminum alloy. Just by looking at the photos, you can see that the texture is completely different and that it is compact. In addition, some parts from RA615H to RA620H are not RA621H, and it should be noted that there is none. Of course, I interviewed the engineers at HRD Sakura, Honda’s F1 power unit development base, and explained why it was turned into a new skeleton and completely machined.

It is also the culmination of “Honda F1 Technology” which revealed the whole picture of the variable intake system. Honda calls the Variable Intake System VIS, which is an acronym for Variable Intake System. The VIS was applied from RA615H in 2015, but at that time it was not possible to guarantee enough space for the intake system because it was summarized under the concept of “size zero”. How was the variable intake mechanism implemented in a tight space? I took a photo of the contents with the lid removed. The VIS was updated in the 2016 10 series and switched to a completely new mechanism in 2017. Based on this mechanism, in 2021 we developed a new system with the cooperation of the team to achieve a certain goal. This is called “Quad VIS”. Please check the magazine for the full picture.

The hallmark of the F1 powertrain is that it is fitted with an MGU-H assembly which incorporates a turbocharger and motor/generator. Honda’s power unit adopts the V-bank of the 1.6ℓ V6 engine, but is keen on adopting the sandwich type that sandwiches the motor/generator with the compressor at the front of the V bank and the turbine at the back. are a fan, you know. Even if I knew that, I should have asked myself “how is it stacked?”, and in this magazine, in order to answer the long-standing(?) question, I posted a picture of MGU-H alone . . . Please check the unique appearance which looks strange. From 2015 to 2021, MGU-H Assy released the whole story at once. Please feel the evolution process with the comment. 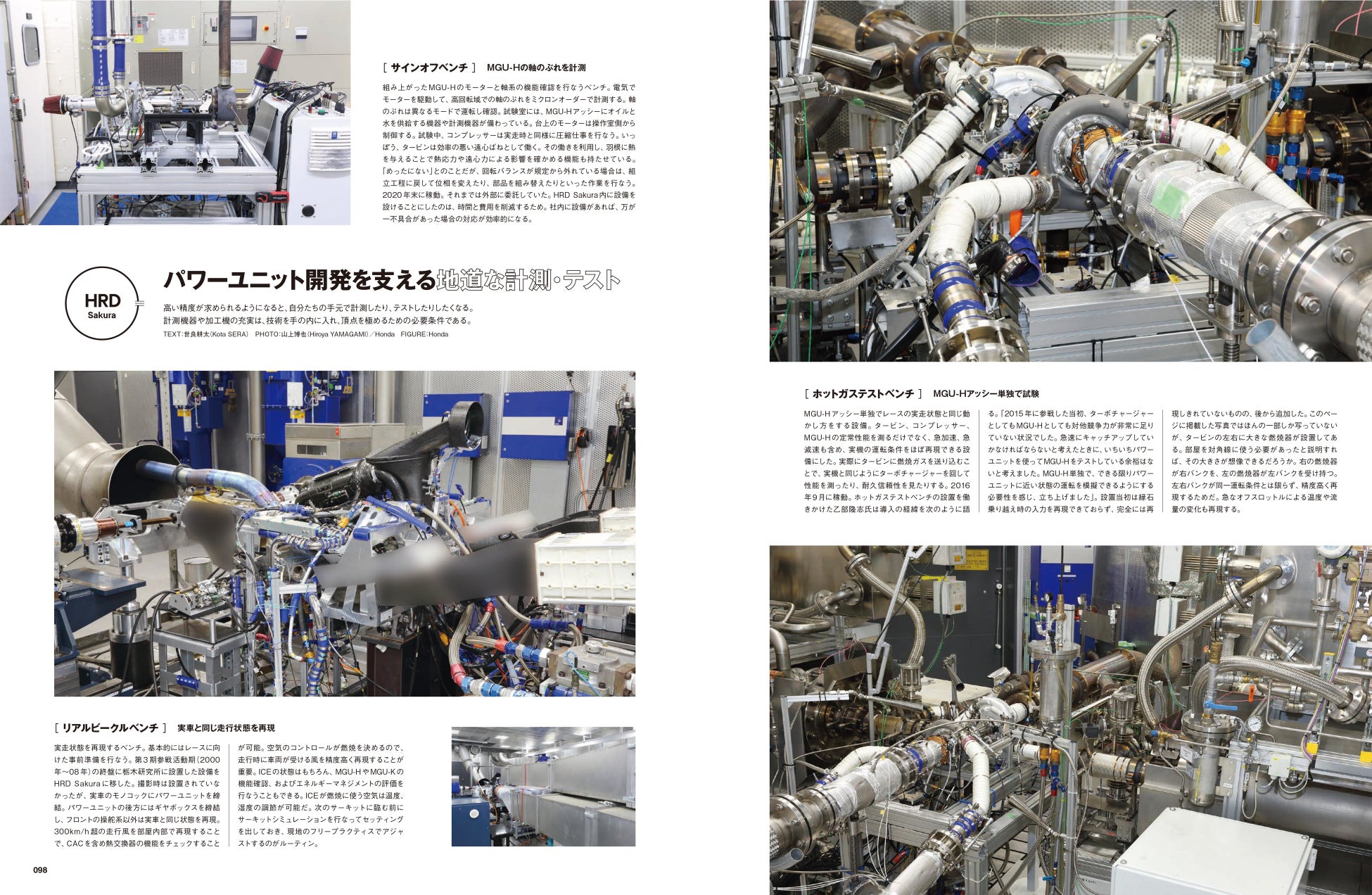 For Honda F1 technology, we also conducted an undercover interview at HRD Sakura development site, which is the development base of Honda F1. When production improvement of more than 100 kW and high precision are required in 7 seasons, it is necessary to master the technology. We can say that it is a necessary condition to reach the top. From the new skeleton to the equipment and testing, if you take “Honda F1 technology”, how fierce technological competition is going on in F1. You should be able to see how Honda caught up to this tough world in a short time.