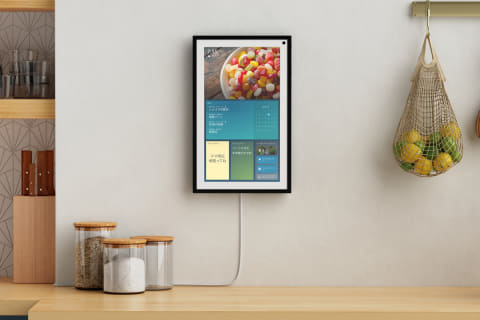 Amazon’s new device “Echo Show 15” will be released from April 7th. It is a product capable of displaying various information on a 15.6-inch screen, and which can also be used vertically or horizontally by hanging it on the wall or using a stand sold separately. The price is 29,980 yen.

Prior to the release, Amazon Japan will hold an online information session. Vice President of Alexa Device, Nedim Fresco at Amazon.com, spoke about the appeal of the product.

“Ambient computing” has been an important indicator of Amazon device vision, Nedim said.

“We aim to develop technologies that make users’ lives more comfortable and apply to their lifestyles. For example, searching in a bag without knowing where the smartphone is is a real headache. And you can’t immediately look up the information you want to know, so when the user returns home, a smart device needs to understand the information and behavior it needs and take action instead. For the next device, I’ve created something that can be used for sharing information like calendars and sticky notes at home, keeping them organized and connecting them, and also for entertainment.” I spoke of the development context.

Accordingly, “The Echo Show 15 is equipped with various Alexa functions and is designed to be a central device for family life as a ‘family organizer'”.

Can be used in portrait or landscape orientation

The screen size of the Echo Show 15 is 15.6 inches and supports a touchscreen. The resolution is Full HD (1920 x 1080 dots). Information you want to share with your family and entertainment such as video distribution can be displayed in high definition and can be used in landscape or portrait orientation. In addition, as a wall-hanging item, we will also prepare a special “Wall Beauty” accessory (sold separately) that allows you to hang it on the wall without leaving any holes. “It’s a big device that lets you see information at a glance, but it’s designed to blend naturally into your home’s interior,” Nedim said.

With the widget function, family calendars and personal appointments can be displayed on the home screen. It can tell you weekly reminders such as garbage disposal and can constantly display shopping lists and memos. It can also detect user input, turn on lights, broadcast morning news, and have a photo frame feature that displays a full-screen photo when an acquaintance visits. Widgets can also be customized according to the tastes of the user.

“With me, the calendar feature that can be shared with the family is the most popular. Any family member can add appointments to the calendar, share and view them with everyone, and simplify weekly tasks. For this reason, we have widgets for to-do lists and shopping lists so that the whole family can add or remove items separately. Sticks are also a popular widget, for example, back to dinner. Talk simply to Alexa of the time and it will appear on Echo Show 15” (Nedim).

As for widgets, it will be open to developers to create their own. Cookpad has already announced a widget that makes it easy to cook while looking at the recipe. If you set a timer, it will display on the screen and you can move the display position so that it does not interfere with the recipe display.

Also, at Echo Show 15, a new widget for “Frequently Used Smart Homes” is available. With just a touch, you can check the status of frequently used smart home appliances and operate them, and you can check the live image from the Alexa-enabled camera by turning on and off the lights and PinP.

As an entertainment feature, in addition to supporting various video distribution services, it’s also possible to play music and podcasts and listen to Audible by talking to Alexa. With the Music and Audio widget, you can view recently played music, new songs, and recommended songs on your device.

The Echo Show 15 is equipped with a next-generation Amazon AZ2 neural edge processor that uses a scalable quad-core architecture. Speech recognition can be processed “locally”, and the ability to process computer vision in parallel has also been added. This has realized a new visual identification function, and it is possible to provide users with a personalized experience.

Visual identification recognizes the person in front of the camera. You can automatically view that person’s calendar, memos sent for that person, music played, and more.

Also, earlier this year, a standard action function using ultrasonic signals emitted from the device’s speakers and computer vision technology will be implemented in the Echo series in Japan. When this function is enabled, when it detects that the user is near the device, it can automatically turn on the power, such as the lighting, and set routine actions such as reading the weather and news without talking.

It is also possible to detect specific sounds such as baby crying, pet crying and human coughing. When a baby’s cry is detected, actions such as turning on the lights in the bedroom can be set.

Echo Show 15 also supports privacy protection. Like other Echo devices, it also has a microphone/camera ON/OFF button and a voice recording delete function. It has a cover to physically cover the built-in camera.

“We created the visual identification feature to protect the privacy of our users. All processing is done on the device. The visual identification feature is optional and pre-registration is required before use. Required. Visual ID can be removed from your device or the Alexa app at any time. Echo Show 15 has been a big step in thinking about your ambient home. Amazon has everyday devices, widgets and Alexa. We continue to ‘evolve. We’re excited to be able to bring Echo Show 15 to everyone in Japan in the future.”